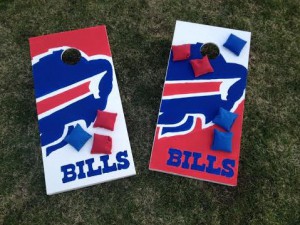 Section B. Innings – Every Cornhole / Corn Toss match is broken down into innings of play. During each inning of play each contestant must pitch all four corn bags.

2. A contestant may deliver the corn bag from either the left or right pitchers box (see above) but, in any one inning, all corn bags must be delivered from the same pitcher’s box. A contestant shall pitch the entire tournament with the same hand or arm, except in the case of a medical emergency.

3. Each individual contestant shall deliver the corn bag within 20 seconds. The time shall start when the contestant steps onto the pitcher’s box with the intention of pitching.

1. The pitcher must maintain constant contact with the designated pitcher’s box during the entire address and release of the corn bag. The only exception is for junior and physically challenged contestants, who must simply remain completely behind the 21 ft. foul line when the corn bag is released. The opponent, while not pitching, shall stand behind the cornhole platform at least 2 feet to the rear of the contestant who is pitching. After a short distance contestant (junior or physically challenged) pitches first they must return to the cornhole platform if the opponent or any contestant on an adjacent court is a full distance pitcher.

Section G. Foul Corn Bags – A foul corn bag is a corn bag which was delivered in non-compliance with one of the rules of the game. It scores as a corn bag out of the count and is to be removed from the Cornhole / Corn Toss court before any more corn bags are pitched. Corn bags already in the court that have been knocked into foul territory by a foul corn bag should be returned to the scoring area. Additionally, corn bags that are in the count, but are knocked into the hole by a foul corn bag must be returned to their original scoring position.

1. The following are rule violations that must be spotted and called by an contestant or assigned judge. The penalty is to declare the corn bag a foul corn bag, which requires the corn bags to be removed from the court prior to resuming play.

(a) Any corn bag pitched when the contestant has made contact with or crossed over the foul line before the corn bag is released.

(b) Except as provided above, any corn bag pitched when the contestant has started or stepped completely outside the pitching box before releasing the corn bag.

(c) Any corn bag not delivered within the twenty second time limit.

(d) A corn bag pitched from a different pitchers box than the first corn bag.

(e) Any corn bag that contacted the court or the ground before coming to rest on the cornhole platform.

(f) Any corn bag which struck a previously defined object such as a tree limb, wire, indoor court ceiling, etc.

Section H. Protests – If a contestant desires to make a protest, the protest shall be made to the judge or tournament official at the time the problem occurs. The tournament judge shall make the final ruling on all protests.
RULE 6 – LENGTH OF THE GAME
Section A. Point Limits – The Cornhole / Corn Toss match shall be played until the first team of contestants reaches (or exceeds) 21 points at the completion of an inning. The winning team does not need to win by two or more points.

Section B. The Inning Must Be finished – The Cornhole / Corn Toss match can never end in the middle of an inning. Thus, if a team that pitches first reaches or exceeds 21 points, the game can not end until the other side is allowed to pitch all of their corn bags and the inning is completed.

Section D. Skunks – The game shall be played to 21 unless a team scores 7 or more points at the end of an inning before their opponents score any points. It this case the game is a skunk and the team that scores 7 or more points wins the match.
RULE 7 – SCORING
Section A. Cancellation Scoring – In cancellation scoring, corn bags in-the-hole and corn bags in-the-count pitched by opponents during an inning or half of an inning in doubles play cancel each other out. Only non cancelled corn bags are counted in the score for the inning.

Section B. Score Calculation – Cancellation scoring may be easily calculated as follows:

1. The points of both contestants are calculated for hole-ins and in-the-count corn bags.

4. In this manner hole-in and in-the–count corn bags from each contestant or team of contestants are cancelled out and only non cancelled corn bags are counted in the score.

Section C. Individual Hole-In Percentage Scoring (HI%) – For purposes of calculating individual Cornhole / Corn Toss Hole-In percentages (see Rule 9 below) that is reported to ACA by members for purposes of ACA ranking and awards, ALL corn bags pitched in-the-hole are included in the total used to derive these percentages including those that would be eliminated under cancellation scoring rules. Only corn bags determined to be foul would be excluded from the individual statistical scoring.

Section D. Recording The Score – In tournament play, the score sheet shall be the official record of the game and will be used to submit the Official Tournament Scoring Summaries to the ACA (see Rule 9 below). Contestants are encouraged to pay close attention to the score at all times. It is highly recommended that visible scoreboard (that all contestants can review and verify for accuracy) be used to keep score during tournament play. If a question or discrepancy occurs regarding the correct score, the contestant(s) may approach the scorer between innings to rectify the situation. If the discrepancy cannot be corrected to the satisfaction of both contestants, a tournament judge shall be called to make the final decision.